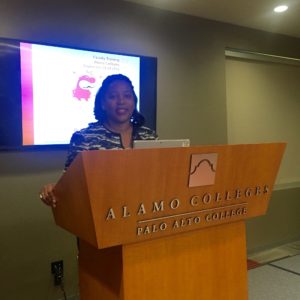 I am asked quite often, “Who has a great anti- bullying policy?”

I have to say Alamo Colleges in San Antonio, Texas has a very comprehensive policy. The staff spent close to a year researching and collaborating to develop the policy. I spent two days with them in late September 2016 visiting their various campuses across the city.

They have a solid policy which sits next to their anti-discrimination and anti-harassment policies. Also, it has a strong anti retaliation clause. More so, the leadership was invested in this policy. As I visited their campuses, they had their various campus presidents and the leadership of human resources present. I wasn’t just sent out to do a talk; I was an introduction to how the leadership will address bullying.

The policy and the people make all the difference. Check out Alamo Colleges for a great policy.

Austin, TX Michael Mercieca kept the faith and after seven years finally saw the courts order Microsoft to pay for bullying him to a near breaking point.

The judge in the Texas employment labor law case, Tim Sulak, has issued a Final Judgement ordering Microsoft to pay $2 million in compensatory and punitive damages and legal fees. Judge Sulak found the tech giant guilty of “acting with malice and reckless indifference” in an organized office retaliation against salesman Mercieca.

“They (Microsoft Corporation) remain guilty today, tomorrow and in perpetuity over egregious acts against me and racist comments by their executive that led to the retaliation and vendetta resulting in my firing,” said Mercieca after the Final Judgement was announced.
Previously, a jury, by unanimous agreement, found that Microsoft and key managers had created a hostile work environment that led to Mercieca’s constructive dismissal and ordered that the 55-year-old Mercieca be paid $11.6 million, but the judge reduced it to the amount as is permitted.

A highly regarded member of the sales department with an unblemished record, Mercieca found himself drowning in nasty workplace conspiracy whereby fellow employees and supervisors undermined his work, falsely accused him of sexual harassment and expense account fraud, and marginalized him and blocked promotions.

The story began sometime before 2007 when Mercieca ended a relationship with a woman who went on to become his boss. Conditions at work began to change for him. Even though Mercieca went to the human relations department at Microsoft, the company did not act and allowed the behaviors to continue and even to escalate.

In addition to complaining about his own treatment in the workplace, Mercieca directly complained to Microsoft icon Steve Ballmer about sexist and racist comments made in the office by VP Eddie O’Brien.

“Rather than do the right thing, the management team went after Michael by getting a female employee to file a sexual harassment complaint and a complaint of retaliation against him,” says Paul T. Morin. “Microsoft could have taken Mercieca’s charges seriously and disciplined the senior manager but instead it engaged in the worst kind of corporate bullying.”