The Bully in the Ivory Tower

Posted by leahhollis on Jan 16, 2012 in bullying, cyberbullying, sexual harassment

Bullying was once labeled as the childhood rite of passage; something we endure on the playground. However, it has transcended from the playground to the work ground. Bullying on the work ground is pervasive, escalating hostility and berating behavior that is exhibited in mistreatment on the job. The bully on the work grounds can make any organization a toxic workplace environment.  Bullying is similar to harassment, making the subject the target of escalating, demeaning and damaging behavior.  However, harassment is when the target is from a protected class (facing discrimination because of gender, race, religious, national origin or disability); bullying, on the other hand is a class free assault on the target.  The former is illegal under the Title VII Civil Rights laws; the latter, bullying, is still legal in the United States.

In the last five years, studies have been conducted which reflect on workplace bullying.  Namie & Namie of the Workplace Bullying Institute studied 7,740 adults nationally in 2007 and reported that 37% of American workers have faced bullying on the job.  Women are more likely to be the target of bullying and female targets tend to quit the job 45% of the time.  Further, when employers are made aware of the bullying, 62% of the time, the situation escalates for the target or nothing happens (Namie & Namie 2009).  Disengagement and turnover caused by bullying costs American corporations over $64 billion (yes with a B) a year.

Further, there are several studies which reveal bullying characteristics in our secondary schools.  Of late, tragic stories have come forward of students who have reached out for help to stem bullying at school.  Students who emerge from an alternative life style, are overweight, or from different religions tend to be the targets of school yard bullying. Some children have lost hope and tragically taken their own lives for relief.  The response has been to pass particularly stringent anti- bullying laws in education, with New Jersey having the toughest anti- bullying laws in the country.

This discussion, however, whether workplace bullying, or school yard bullying, misses the application to higher education.  The Ivory Tower is supposed to emerge from intellect and enlightenment, showing the way to the American dream through education.  However, if the higher education sector is a subset of American culture, it would seem the shadows of bullying 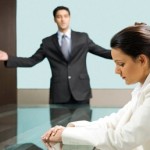 would fall even here.  Consequently, the structure of higher education is dissimilar from corporate structures given the tenure track system, the reliance of scholarship, and reason which philosophically might not be tied to quarterly balance sheets. Subsequently, bullying would manifest in ways yet examined by previous studies.  The result of a disengaged higher education staff, or faculty could have a direct impact on the academy’s function of enrollment, scholarship, advancement and student matriculation.

I would also argue that the casualties of bullying in higher education are not just the immediate target, but the students we strive to serve. Imagine teaching a class after being bullied.  The emotional capital required to connect with students has been spent on defending against the bully. Student service administrators need to focus to advise students, guide students, and serve students, as many students come to our campus with previously identified chronic issues themselves.  The bullied student service administrator has also spent his or her emotional capital surviving a toxic work environment, and potentially has precious little energy to invest in students.  Invariably, when I speak with my colleagues in higher education, most have commented on the disappointment they endure when realizing that bullying has invaded their departments.  Some of these colleagues admit that they just don’t have the energy for a new project, refreshing ideas and student engagement.  They are emotionally exhausted while trying to make it through another disrespectful day in the academy.

While bullying is still legal, it is clearly destructive.  Higher education, like many other sectors, suffer from bullying advances and will continue to endure such without proper policies and professional development to prevent bullying and hostility for all faculty and staff members.  Incivility in the academy doesn’t just affect university employees; it has a direct effect on the next generation of students that we influence through education.

Namie, G and Namie, R. (2009) The Bully at Work. What you can do to stop the hurt and reclaim your dignity at work. Sourcebooks. Napersville, IL.